Get Squared by Jenny King Designs: The Class 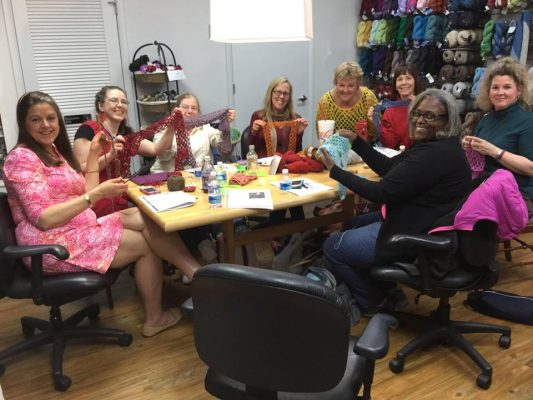 I was lucky enough to be Jenny King’s assistant and chauffeur for the day when she taught her Get Squared™ for the Perfect Fit class at a yarn store in Nashville, TN, just one day after STITCHES South. I’d love to share with you about what happened in that Get Squared™ class.

The First Half of Class

The Second Half of Class

The Magic of Jenny

What really made this class amazing, though, was Jenny herself. The students were all skilled crocheters, yet were still pretty nervous about their ability to create a garment that was going to fit and flatter their bodies. Many of us are pretty self-conscious about what we see as our body flaws. Jenny was able to use gentle humor to put everyone at ease as she talked about why her construction method and designs result in garments that will fit and look good, no matter what you think you figure flaws may be. Everyone was so comfortable and relaxed in talking about their fitting concerns that it was absolutely amazing! Another amazing thing is that what some students saw as a figure flaw, other students saw as a figure asset. I think everyone left feeling more confident about their figures!

Jenny is also an incredibly patient teacher. One student had never made anything but rectangular afghans before, so she had no experience with the shoulder shaping used in Jenny’s construction method. As everyone worked on their teddy bear-size sweater, she just wasn’t quite understanding it. We could tell she was feeling not-so-great about herself. Jenny stepped up with all sorts of encouragement, working with her until she got it. It actually didn’t even take her that long to “get it’; the problem was only in comparing her progress with that of the other students. Once she got it, though, the joy and sense of accomplishment were simply shining through this student’s eyes! By the end of the class, she had made just as much progress on her actual garment as had everyone else.

Student Reactions at End of Class

Now you know how great I think this class was, but you’d probably like to know what a couple of the students thought.

One student said (paraphrased): “If I had known this class was based on the granny square stitch, I never would have signed up to take it. And oh my goodness, just look at everything I would have missed! I am so glad I took this class!” This is the student who purchased enough  yarn to make about six different garments.

Another student said (again paraphrased): “I’ve tried to make a garment twice in the past. Each time, I got so frustrated that I threw the entire project in the garbage! I’ve been too afraid to try making a garment ever since.” This student got far enough with her garment to try it on, see that it did fit, and even recognize that it was going to look fabulous on her. She then said, “I can’t wait to finish this project and start another one!”

Jenny will hopefully be coming to the United States relatively frequently (all things considered) over the coming year to teach this class. If you ever have the opportunity, I highly recommend taking the class with her. She’ll be teaching at the Crochet Guild of America’s annual conference in San Diego at the end of July. Unfortunately, the class is already sold out. She is probably going to be teaching the class at some other large crochet and knitting shows later in the year, but class schedules haven’t been finalized yet, so I can’t give any details. Just keep an eye on Crochetville’s Facebook page, as I’ll make announcements there as soon as Jenny lets me know what has been officially confirmed and can be announced.

If you want to get started NOW and can’t wait for a class to be offered near you, then step right up and buy the videos! The $39.99 price is in Australian dollars. With current exchange rates (5/10/15), the price in USD is approximately $31.50. Here’s how to order:

NOTE: Using the coupon code will give Crochetville a small commission at no additional cost to you. If you don’t want us to receive this commission for whatever reason, you can choose not to enter the code.

Even if you can’t have the fun of being in a class with Jenny right now, you can have the fun of taking part in a Crochet-Along. Come join us! You can share photos of your progress and of your finished objects. Get inspired by seeing what others have made and get ideas for what you want to make next. Learn how to take the basic patterns and adapt them. For instance, I took the basic pullover sweater design and made a dress (blog post coming soon)!

The Crochet-Along will take place in two separate places, to accommodate your internet preferences. You are welcome to join us in either location or in both!

We look forward to seeing you in the Crochet-Along!

The Get Squared™ Program Overview

Review of an Actual Get Squared™ Class

All photos are Copyright 2015 by Jenny King Designs. All rights reserved. Used with permission.

3 thoughts on “Get Squared by Jenny King Designs: The Class”