You’ve arrived at the annual NatCroMo Blog Tour! What is that, you ask? It’s a virtual celebration of National Crochet Month with new blog content daily throughout March, including featured crochet designers, free patterns, discounts, giveaways, and more.

This year our theme is The Crochet Concert and we are celebrating music as creative inspiration. Each featured designer’s showcase will include an “Opening Act” (a quick or easy pattern); “Intermission” (the designer’s favorite crochet tools, yarn, or books); a “Showstopper” (an impressive or unique pattern); and “Designer’s Choice” (any pattern of the designer’s choice).

See all of this year’s tour here: NatCroMo Blog Tour 2021.

Today on the blog tour, we are featuring Karen C.K. Ballard, who identifies primarily as a needlework historian and presenter, but is also a crochet designer, teacher, artist, and competition winner. You can find Karen’s writing on crochet (and other needlework) history in PieceWork and Crochet Traditions magazines.

Karen has been crocheting since she was seven years old, when her Great Aunt Laurene taught her basic stitches. She didn’t learn to read patterns until years later when she was pregnant and wanted to make baby clothes. But through the years she found a special fondness for freeform, particularly mixed with beadwork. With a lifelong interest in antiques and being married to Ted, a historian, she gravitated to collecting needlework tools and old publications. That coupled with an interest in natural history, especially rocks and fossils, fueled her design inspirations.

Upon retiring from a satisfying computer systems career, she devoted herself to writing and presenting needlework history, in addition to some designing. Unfortunately, most of her current designs are destined for shows or publications so she is not at liberty to show them. The past year’s isolation should have been put to good creative use, but she found that not knowing if plans would come to fruition had a stifling effect. Now with her second shot scheduled, she feels the creative juices starting to return.

Karen was inducted into the Jean Leinhauser Crochet Guild of America Hall of Fame in 2020. A well-deserved honor for a person who is such a treasure in the crochet community!

Karen’s Special for Our Readers

Get the complete details of what is in each lot and enter the giveaway here: https://crochetville.com/vintage-needlework-publications-giveaway-the-crochet-concert-blog-tour/

Is music a source of inspiration for your crochet creativity? Or do you listen to music while you crochet? If so, tell us about it. If not, what is something else that helps fuel your creative inspiration?

Karen tends to create in front of the television – on which she mostly “watches” news. She tends to listen to music (all types, but mostly folk, show-tunes, and 1960s music, while writing on the computer). Although Karen likes background noise, neither type is really for creative inspiration. Her crochet (and other) creativity is mostly fueled by multicultural design, stories, history, colors, and textures, often combined in unexpected manners. For example, although not crochet, she has started gathering elements to make a “Silk Moth Necklace” (for herself–not for design sale), influenced by Native American squash-blossom necklaces, but with a silver and stone moth replacing the central naja, and silver mulberry leaves (silkworms’ only source of food) with garnet-bead berries, replacing the squash-blossoms.

Pattern name: This photo is sneak peek of a possible future pattern, and the working name is Ice Crystals Scarf

Get the pattern: Not yet published

About the pattern: Prior to the pandemic Karen and her husband would frequently take night walks in old town Manassas. But most of her winter clothes are dark. She needed something light and sparkly to be seen crossing the roads. The scarf is liberally sprinkled with stitched-on aurora borealis Swarovski crystals.

Tell us about one (or more) of your favorite crochet-related items.

Rather than individual items, Karen has three favorite categories:

About: A photo of Karen C.K. Ballard with April Gammasche, presenting WWII knitting at Eisenhower Farm, summer 2019. Karen looks forward to being able to give similar presentations again in later this year or next year.

Here’s where you can connect with Karen online to be sure you don’t miss any of her exciting adventures in needlework history! 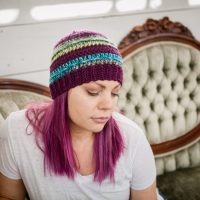